By Dani Fitzgerald dfitzgerald@timesonline.com Posted Mar 12, 2018 at 4:00 AM 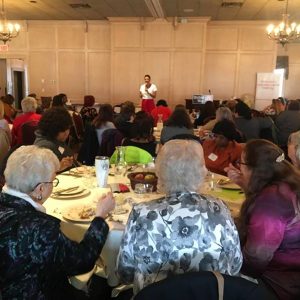 Darieth Chisolm used her voice to empower herself. And she urged those in attendance at the 11th Annual Lawrence County Women’s Conference to use their voices as well.

″‘Use your voice,’ my mother told me. ‘Use it for those who can’t and for those who won’t,’” the Emmy-winning television personality, author and motivational speaker told the crowd at Shakespeare’s Restaurant in North Sewickley Township.

Chisolm spoke on a personal level during the event as a victim of cyber sexual assault last year, when she woke up one morning to find naked images of herself scattered across the internet.

“In that moment, you don’t know what to sense,” Chisolm said. “This was done from the hands of someone you love and trust.”

Currently, cyber sexual assault is not a federal offense. But a federal bill introduced last year by U.S. Sen. Kamala Harris of California is looking to change that.

But Chisolm isn’t choosing to victimize herself. Instead, she’s using her experience as a platform to empower women.

“I looked in the mirror and thought, ‘Who am I?’” said Chisolm to the crowd of women. “I had to make a decision: Who do I need to become now?”

By changing the way she thought about herself, Chisolm was able to change the way she processed her assault.